Looking back on my childhood it seems that horses and ponies played an important part in it. John Goodall had a large livery-stable, which provided cabs for the station – luggage on the roof – carriages or landaus for special, with sometimes two horses, gigs and pony-carts, hearses with handsome black horses decked out with black plumes. Father used to hire a Shetland pony for me to ride when I was about five but that did not last long as Mother was afraid I would fall off and injure myself. (Later I got a bicycle on which I performed far more hazardous feats – tramlines made cycling dangerous as it was easy to catch ones front-wheel in one when speeding down the steep Townhill Road). 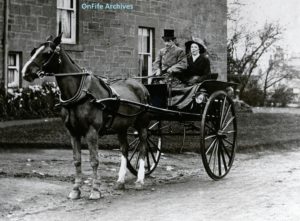 But my great delight was when Father summoned a `trap` from Goodall`s, perhaps in a late summer afternoon when he had returned from the office. This was a lightweight vehicle with two high wheels and a seat for two perched up behind the dashboard and usually a mettlesome animal between the shafts. With a rug round my black-stockinged legs and my feet not touching the floor I would sit by Father`s side while he, expertly handling the reins and the slender whip, would take us out into the country, down to Limekilns perhaps and round by Saline. Then, as there was very little traffic on the roads, I was allowed to experience the thrill of driving the horses myself, learning to hold the reins properly as we went along at a smart pace that only slackened when climbing a hill. That was a real treat and I`m sure Father enjoyed it as much as I did. 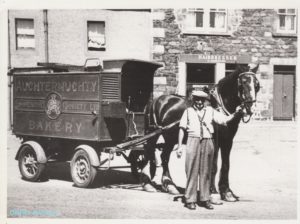 Then there were the tradesmen`s horses, tramping down the avenue to the yard where they took sugar from me while the baker – Allans, with a very smart van high-sided with gold lettering on red paint – or the butcher or the grocer had a chat with the housemaid at the back door. Our Doctor Fleming who had a small brougham in winter, an open Victoria in summer, also made frequent calls. His coachman, Peter McArthur, was a firm friend of mine and he sometimes took me off for a turn round the Park while the doctor was taking Mother`s pulse. He was never in a hurry and never complained when we kept him waiting. Changed days indeed! 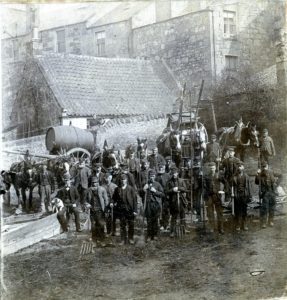 Ashes and house-refuse were collected by another horse-drawn vehicle belonging to the town corporation from the stone-built rubbish-container at the top of the garden between the greenhouse and the wash-house. I met other horses on my way through the town and often stopped for a chat as they stood patiently by the pavement. There were always two or three horse-drawn cabs waiting at the Lower Station – in those days Dunfermline was an important railway-junction and one could take trains to Edinburgh, Perth, Stirling, Alloa, St. Andrews, etc. at frequent intervals. The bus that went to Limekilns and Charlestown was horse-drawn and for some years after the `14 War could be found waiting at the Glen gates near the Abbey. 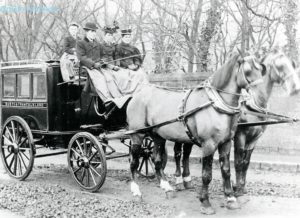 When I was about eleven Mother and I stayed one summer holiday at the Athol Palace, Pitlochry, and went on a wagonette to Braemar. There were four horses, passengers inside and out, and when we reached the Devil`s Elbow everyone except the driver had to walk up – and later down – the steep curves of the road. I was on the box beside the driver – trust me! – and was allowed the honour of holding the reins for a short spell. Driving four horses, spanking along – I have never forgotten it. 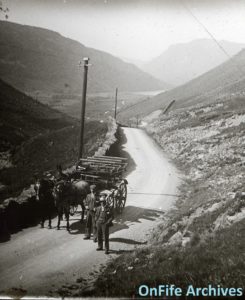 Thanks to Cupar Local Studies for the majority of the photographs.

Mima Robertson was born in 1901 to John Whyte Robertson and his wife Jemima Taylor and was baptised Jemima Simpson Taylor Robertson. Her father worked for the family firm of Hay and Robertson, linen and cotton manufacturers, and her mother was the daughter of John Taylor a West Indian merchant. The couple already had two children, Margaretta born in 1889 and William born in 1893. In 1891 the family lived

at Dunsloy Villas, New Row, in 1901 at 3 Comely Park Place, and from about 1906 at Witchbrae, Townill Road. Witchbrae had been built in about 1860 for the Hay family and was advertised for sale in 1926 as a `fine dwelling house` set in two acres of grounds with excellent views to the south. It was lit by electricity, had several public rooms, six bedrooms, bathrooms, two bedrooms and a bathroom for the maids and numerous utility rooms and outbuildings. The Robertsons kept at least three female servants as well as the outdoor staff.

After an early education at Roseberry House, a private school in the Masonic Lodge, New Row, Miss Robertson was sent to boarding-school. She was so unhappy there that she was brought home to be educated by a governess. The governess, apparently an inspiring teacher, had taught classics at a boys` school and now she taught Latin to Mima, who found it stood her in good stead in her writing.

Mima had written stories from early childhood and when she was 19 received her first payment, 20 shillings from Punch for a humorous article. She loved to travel especially to Brittany and in 1926 she had a story called A Change of Air, set between Brittany and Dunfermline, accepted by a London agent and publishers, who changed the title to The Leopard`s Skin. Other novels with a Dunfermline connection were The Sport of Circumstance and Bitter Bread , while After Stormy Seas was again based in Brittany and Music in the Air in Gottland, the Baltic island, also a holiday destination.

Then followed two historical novels under the name `Alison Taylor`, Alison because it was Scottish and Mima liked it better than her own, and Taylor, her mother`s maiden name. For a change, Evil Enchantment of 1930 was a psychological thriller which she felt would have made a good film.

In the early 1930s when her writing had become a real necessity Miss Robertson was invited to contribute serials to the magazines run by Leng Publications of Dundee, particularly the People`s Friend. She was associated with the People`s Friend for some 40 years and found that writing to order involved a strict routine unlike the free-and-easy hours she had been used to. She continued to write novels and in 1953 published The Castilian, a historical novel about William Kirkcaldy of Grange, who was executed for his attempt to hold the besieged Edinburgh Castle for Mary Queen of Scots.

Mima Robertson had talents other than writing. She played first violin in Dunfermline Amateur Orchestra and was an artist and a needlewoman. She captained the Dunfermline Tennis Club ladies and became President of the Dunfermline Soroptimists. Miss Robertson never married and during the depression of the 1930s, when the family fortunes plummeted, the income from her writing became even more important. From Witchbrae, Mima and her parents moved to 9 Cameron Street where her mother died in 1944 and her father in 1959. Miss Robertson then moved to a flat at 15 Cameron Street and it was here in 1979 that she wrote her magnum opus Old Dunfermline and where she died in 1985 aged 83.

In Miss Robertson`s article on horses, the house referred to is Witchbrae and one of the six bedrooms probably became the schoolroom and what Miss Robertson called `My Room`. `Neil` was the gardener Neil McLean, and `Miss Nimmo` possibly the `nurse and sewing maid for one girl 4½ years` that Mrs. Robertson advertised for in 1906. Or perhaps `Miss Nimmo` was the governess who did sewing as well. The sources for this biography come from various on-line genealogy and newspaper sites, from Dunfermline Press, March 13 1970 (largely reproduced in Hugh Walker`s The History of Hay and Robertson, 1995) and Miss Robertson`s papers, which include (possibly unpublished) stories and plays, and are currently being archived at Dunfermline Carnegie Library but are not yet catalogued. 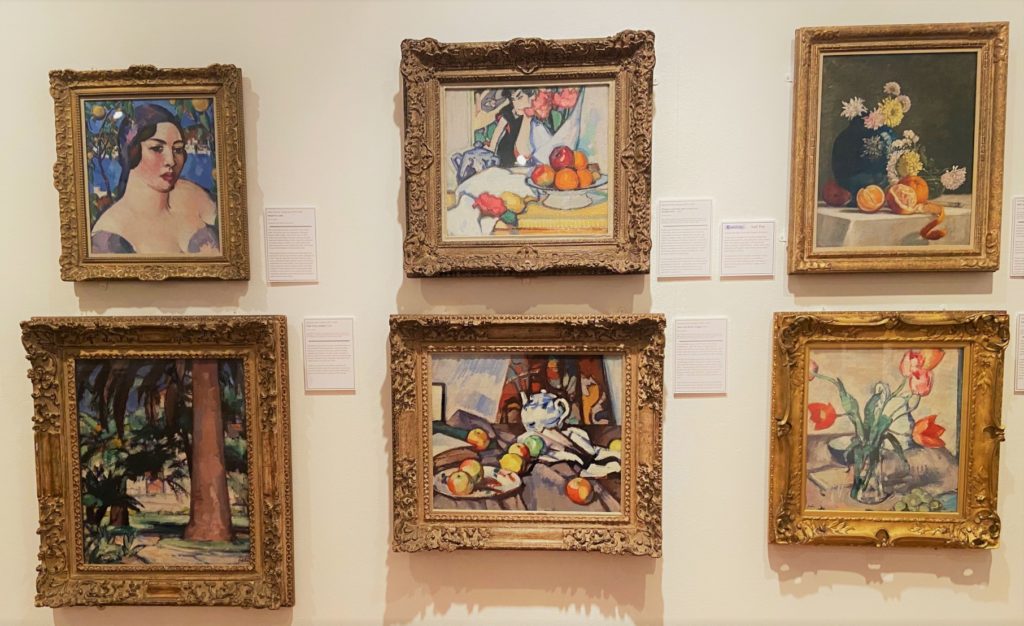 A Brush with Brushstrokes 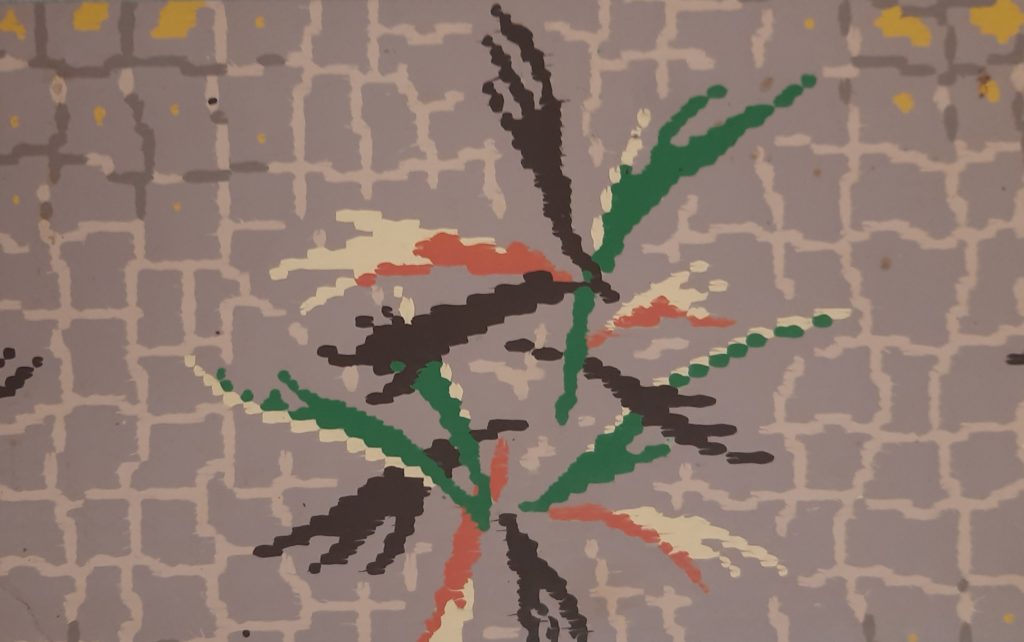 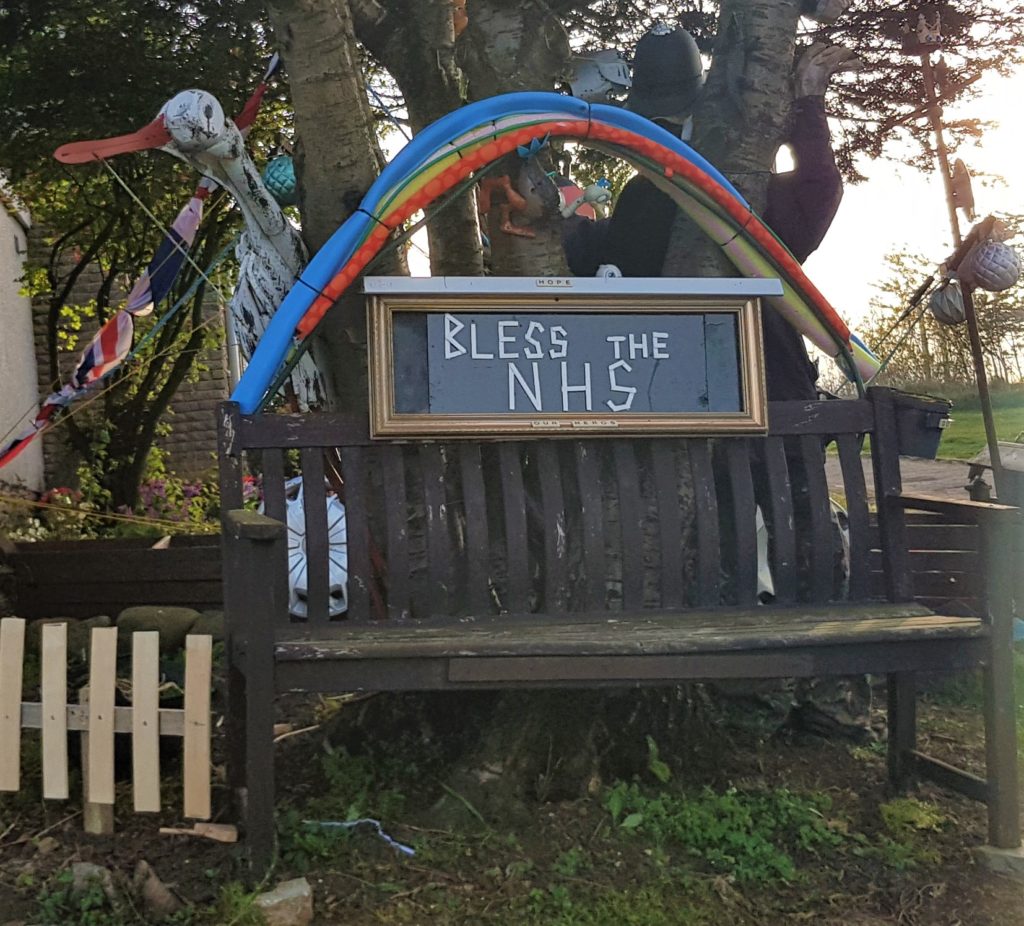