Fife was one of Scotland’s main coal mining areas for hundreds of years and the industry had a massive impact on people’s working and social lives. A wide range of material from collieries and mining communities is held by our museums. Most is from the coalfields of west and central Fife from the late 19th century right up to the 1990s.

The working life of a miner was a dangerous one and many items are concerned with health and safety. We have numerous underground signs, lamps and mines rescue equipment. We also have stretchers from the Michael Colliery, where one of the worst mining disasters took place in 1967.

A large part of the collection is photographic – including a series taken at Fife’s last deep coal mine at Longannet Colliery and the 1984/85 miner’s strike. The strike is also charted through a collection of archives, badges, banners and placards collected at the time of the dispute.

Among the most unusual objects in our collection are some which are made from coal! You can see one of these – a unique chair cut from parrot coal ON at Kirkcaldy Galleries. 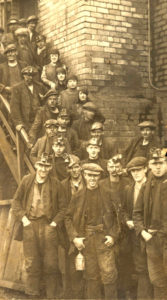 Within the Museums and Libraries collections there are over 1,000 photographs, books and documents relating to the mining industry. The archives range from the Fife Mining Memorial Book (which lists all miners who have been killed at work in Fife) to a ledger from the Michael Colliery from the1930s, detailing hundreds of miners that worked at the pit  –  a wonderful resource to help you to trace your family history.

You can find information on other Scottish coal collections at www.coalcollections.org