Kirkcaldy was one of the main centres of the Scottish pottery industry in the late 19th and early 20th centuries. The town had four potteries that made many products, from everyday items to much larger ornamental pieces. 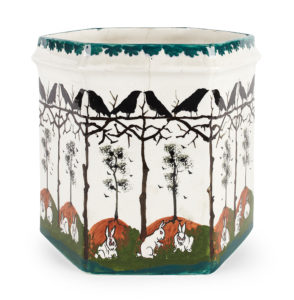 Our museums have around 1,000 pieces of pottery that were made in Kirkcaldy, along with photographs and archives from the industry.

The most famous pieces we have are Wemyss Ware, made at the Fife Pottery by Robert Heron & Sons. The hand painted designs were inspired by chief designer Karel Nekola who came to Fife from Bohemia in the 1880s. Vivid and colourful flowers, fruit, insects and animals decorations became a trademark of the area. Some of them were even made in the shapes of animals – with pigs and cats, being two of the best known.

The Fife Pottery also made a range of transfer-printed wares as did the largest of the Kirkcaldy factories – the Links Pottery. This started in the 18th century and the museum collection includes rare examples of Links transfer printed, hand painted and sponge ware pottery. One of the most talked about pieces in our collection is a large stoneware garden chair on display at Kirkcaldy Galleries. 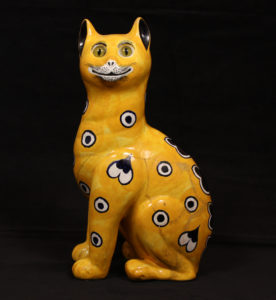 We also have products made by the two smaller Kirkcaldy factories – the Rosslyn and Sinclairtown Potteries. The Sinclairtown pottery collection includes a large number of shards and unglazed pottery excavated from dumps at the pottery site in 1991. It specialised in teapots – reputedly making 700 dozen a day!

You can see examples from all the Kirkcaldy potteries at  Kirkcaldy Galleries.