ZOOM IN ON DUNFERMLINE 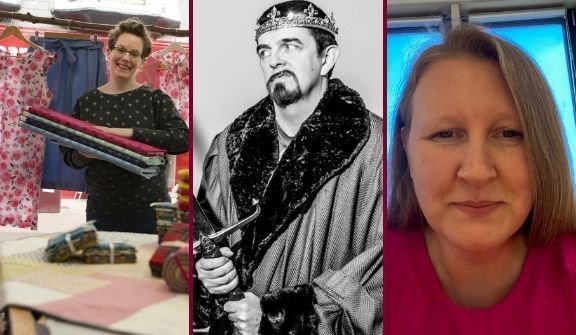 Inspired by Channel 4’s popular TV programme, Gogglebox, we invited three ‘weel kent’ faces from Dunfermline to comment on archive film from the town and recorded them chatting using Zoom.

Combining footage from OnFife’s own archive with home videos shot by Arthur Harrison courtesy of his niece Heather Anderson, a 15-minute video was produced documenting outdoor events that took place in the town from the 1960s through to 1990s.

The aim was to prompt audiences to reminiscence and comment on the archive footage as well as on our commentators own recollections and reflections of Scotland’s ancient capital city.

Tomm Campbell – Actor and Presenter who is world famous, ………. in Dunfermline. Well parts of Dunfermline, the parts near his house.

Lisa Edwards has lived in Dunfermline most of her life. She is passionate about the Town and is proud to be part of it.
Aileen Wright is the owner of Sew Yarn Crafty & Studio on Dunfermline High Street. She has lived in the town for just 5 years but has enjoyed becoming part of the community and finding out about the long and interesting history of the place she now calls home.

Let us know what you remember and recognise in the film by using the hashtag #ZoomInOnDunfermline on social media.

This project is supported by Film Hub Scotland, part of the BFI’s Film Audience Network, and funded by Screen Scotland and Lottery funding from the BFI.

Let us know what you think about this project by completing this survey:
https://www.surveymonkey.co.uk/r/FHS_Audience_Survey