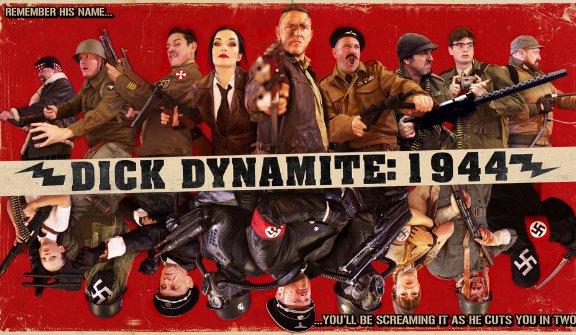 Dick Dynamite:1944 is an adrenaline pumped hell ride from start to finish. This ambitious, locally produced, over the top WWII movie has been gaining momentum since filming began back in 2019.

The film has already had a massive knock on effect in the local community, providing opportunities for hundreds if not thousands of aspiring and established creatives and movie lovers as well as the involvement of local business and even charities. With filming recently completed, Dick Dynmite:1944 has seen this rag-tag crew travel all over Scotland to film in 3 airfields, 2 underground nuclear bunkers, a Victorian toilet and even managed to film with various aircraft used in the D-Day landings. Throughout the production, this little film has been turning heads and making headlines and is fast developing a reputation that precedes it at home and abroad.