For this year’s Black History Month, we’re sharing historical and contemporary stories, poems, and performances as well as suggested reading lists and links to online resources.

You will find local historical information about Black History in Fife, including the life of David Spence and the role of the Fife handloom weavers in the 18th Century. You will also find out about work by contemporary Fife creatives, including Musician Mike Delaitre, Poet Fadeke Kokumo Rocks and Tattoo Artist Abz Mills. 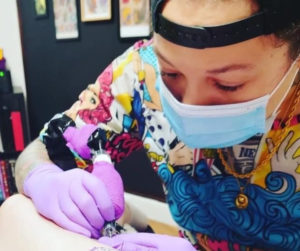 Abz Mills, a Scottish-Jamaican tattoo and graffiti artist based in Kirkcaldy, will be taking over our Create In Fife Instagram account at the end of October.
Abz has been an artist since childhood, always able to visualise and create ideas. As part of the Black Lives Matter Mural Trail, Abz’s work on the Usher Hall Glass Wing called for justice to Sheku Bayoh, and her artwork on Lothian Road sat as a provocation to Scotland as a nation.
Abz has been resident artist at Spaghetti Tattoos (Kirkcaldy) since 2017. Her style is bright, colourful and thought-provoking.
Follow Create In Fife on Instagram to see Abz show-case her work.
Find out more about Abz and her work on Facebook, Instagram and in The Courier’s recent article (2 October) about her.

Looking at Fife, Scotland and Slavery

We have collated a set of resources and weblinks that relate to Scotland and Fife’s involvement in slavery, empire and colonialism. You can explore them at the following link: Looking at Fife, Scotland and Slavery

You can find out more about Black History Month on the Coalition of Racial Equality and Rights website.

In 2020, a group of students at the University of St Andrews researched links between Fife and unfree labour. They wanted to uncover some of the untold stories and have created a short film based on the story of David Spence, a slave who successfully fought for his freedom. The students named their work ‘The Spence Project’ in his memory. To find out more email spence@st-andrews.ac.uk.

In the 18th century, handloom weavers in Fife made hundreds of thousands of yards of a type of coarse unbleached linen called osnaburg. Osnaburg was exported from Scotland and used to make clothing for enslaved people in British colonies in North America and the West Indies. This short video explores Fife’s part in weaving linen that clothed enslaved people. Get in touch to find out more: LocalStudies.Kirkcaldy@onfife.com.

Here’s the wonderful Joseph Coelho with a poem celebrating the important women who fought for justice and equality. This piece was recorded for our LibrarYAY Facebook group.

Burntisland-based Musician, Mike Delaitre, is originally from the Indian Ocean Island of Mauritius, an island of sun, warmth, and colour. With his roots in reggae, Mike’s music is a fusion of influences from Mauritius and beyond.

In October 2020, we commissioned Mike to record a performance for the people of Fife. In this short video, Mike tells us about his story and how he came to live in Burntisland, and his new Creative Scotland-funded project Konnection. He says:

“The video is the story of my journey from the sun to the moon. A journey of life, love and the four seasons.” – Mike Delaitre.

This commission was made possible thanks to funding from Creative Scotland’s Performing Arts Venue Relief Fund.

Currently based in Edinburgh, African/Asian/Scottish poet Fadeke Kokumo Rocks was raised in the Fife Mining Village of Cowdenbeath. Hers was the only black family in the area and she left school with no qualifications. It wasn’t until she attended university in the mid-90s that she was diagnosed with dyslexia. Kokumo currently has three books available through publishers Luath press Ltd.

In October 2020, we commissioned Fadeke to record a performance of her poetry for the people of Fife to enjoy.

This commission was made possible thanks to funding from Creative Scotland’s Performing Arts Venue Relief Fund.