You are here: HomeMuseumsLinoleum Lives!

Linoleum is not only an amazing floor covering, but also lends itself to producing intricate artworks.

The artwork below shows the Queen Elizabeth, a cruise liner which shuttled between Southampton and New York for over 20 years. The ship was built to replace the Aquitania, which had been in service since the 1910s. Along with its sister ships the Mauretania and the Lusitania, it was built by the Cunard line to compete with the White Star lines Olympic-class liners – the Britannic, the Olympic and the Titanic.

Despite being just a few degrees of separation from the fame and tragedy synonymous with these vessels, the Queen Elizabeth enjoyed a life which was long but largely uneventful. This is a nice picture of a big ship, but that’s not what makes it special. What really makes this object incredible is that it’s made entirely of linoleum.

Each section of the picture is a precisely cut piece of linoleum, arranged to give the impression of the steamer at sea. We don’t know who made this picture, or when. It seems likely that this would have been around the time the ship was launched in 1939; it then spent several decades hanging in the Britannia Hotel on South Street, St Andrews. A label on the back of the picture indicates that it was framed by Haxton of Kirkcaldy, which suggests it may have been created in a Kirkcaldy linoleum factory, or by someone who lived in the town.

So, why would you make a mosaic out of linoleum? Though it seems a strange choice at first, there are lots of good, practical reasons which make lino an attractive art medium. It’s easier to cut to shape than wood or tile – over which it also has a price advantage. Plus, any designs made this way will be as easy to clean and care for as a kitchen floor – whereas a paper collage or painted picture might well look as though they’d be through the wars after a few decades on display. This durability is the same reason that linoleum was often used to floor large ocean liners, including the ill-fated Titanic and Lusitania, and probably also the Queen Elizabeth itself.

A page from Barry and Staines Ruboleum and Linoleum catalogue. KIRMG:1982.393.

The practice of making designs out of different shapes and colours of linoleum is also not restricted to artistic endeavours. From its invention in the mid-19th century, decorative linoleum was created by printing designs on the surface of the material. This was a time-consuming process, as each colour had to be applied using a different printing block, the edges of which had to be closely matched to create the overall effect. There are some printing blocks in our collections, which are around 45cm squared in size – the process of layering each colour would have to be repeated to cover the entire surface of the length of linoleum.

Though this allowed companies to create intricate designs – such as this nursery rhyme themed pattern – it had one serious weakness. Over time, the designs would wear away, limited the lifecycle of the product at a time when durability was highly-prized by potential customers.

In response to this, Frederick Walton – the man who had invented linoleum in the 1860s – developed inlaid linoleum, whereby designs were built up by piecing together different coloured piece of lino. Walton later developed a mechanical means of creating inlaid linoleum, making a product which was quicker to create as well as more durable than printed lino. 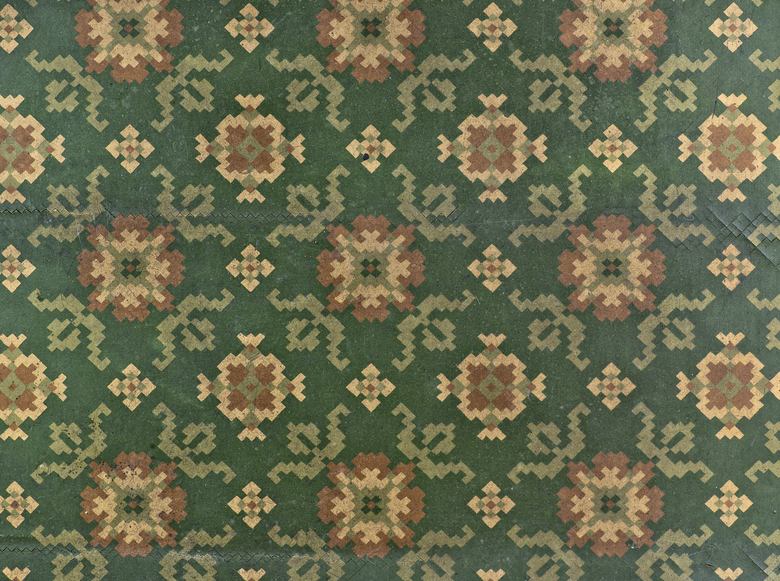 In Kirkcaldy, however, this process continued to be done by hand, as well as by machine. It was usually done by women factory workers – who were encouraged not to talk so that they could concentrate on the intricate and time-consuming process. 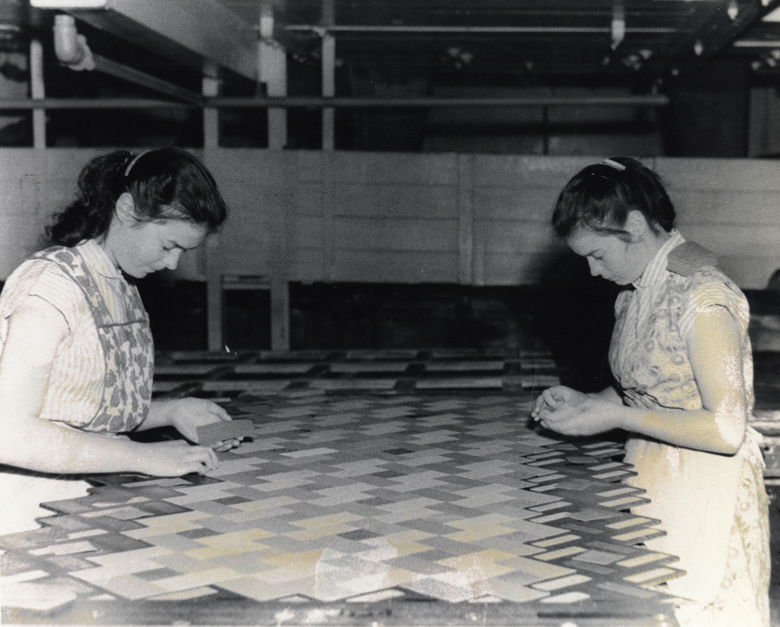 The Queen Elizabeth joins four other lino artworks at our collections centre in Glenrothes: two landscapes, one showing Lambeth Bridge, London, and the other showing an unidentified country scene (somewhere near Oxford and Bath, if the sign-post is to be believed); and two portraits, of Queen Elizabeth II and the Duke of Edinburgh. Framed linoleum mosaics are extremely rare – we are not currently aware of any other objects like this in museum collections – this is something I’ll be researching as the project continues!

If you have any questions or information you’d like to share, you can get in touch at lino@onfife.com